By basing our products on Microsoft Business Central, we give our users a familiar Microsoft look and feel. If your organisation is already running a NAV/Business Central solution this will of course help your people get on board quickly and training costs can be reduced.

An effective payroll solution can give your organisation the tools to understand and manage the payroll cost more efficiently. Payroll departments can quickly become accountable to the rest of the business providing planning, analysis, and financial reporting information. Our solution also allows for flexible data capture which provides management with the necessary information for their reporting requirements.

Payslips and P60’s in PDF formats are available. They can be emailed with individual passwords to increase security if required. 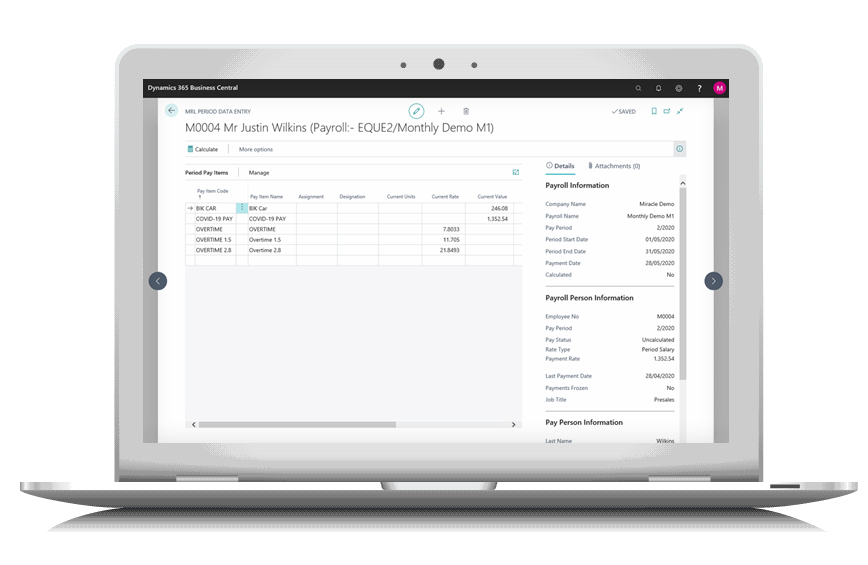 MiraclePay is available for NAV2013 right through to Microsoft Business Central.

When NAV2013 was initially released it had a completely new client interface which was initially named the Role Tailored Client (RTC) and is now known as the Windows Client. In the classic versions of NAV (we will refer to our product as MiraclePay Classic), the experience was common to all users, each user had the same screens (if they had permissions to use it). In the NAV 2013 environment the client interface is tailored so that can users can only see information pertinent to their role and day-to-day activities. It also requires a SQL datatabase.

Since this major release, Microsoft have also released NAV2015, NAV2016 and now NAV2017. So at Miracle we’ve been working hard to ensure our systems are compatible with each version. If you have any queries on NAV versions, you can follow the link below which provides a feature comparison tool or contact our sales team on sales@miracle-dynamics.com.

In broad terms, Miracle have simply migrated the functionality in the classic version of MiraclePay all the way through to Microsoft Business Central. If you have any questions please get in touch at sales@miracle-dynamics.com

Interested to see what other functionality we offer within Business Central?

Providing the means to capture employee benefits and expenses for reporting purposes.

A powerful tool to help your business gain full visibility of job profitability, leaving you in control to deliver successful projects.

Providing a secure means to send electronic payslips and other documents saving considerable time and money.

A secure solution to store and access payslips and P60’s on-line helping to achieve considerable time and financial savings.

Our solution allows you to manage a bureau in a flexible manner and run multiple payrolls as a single entity.

To understand how Miracle can benefit your organisation please email miracle@eque2.com or alternatively call our office on 01628 702702. Alternatively please fill in the form below and we will get back in touch as soon as possible. Please note that some fields are mandatory.